There is little knowledge of specifically why Eddie Van Halen teamed up with Peavey to design, model and release his first signature line of amplifiers. The reasonable guess, however is obvious. Eddie was becoming dissatisfied with both his Marshall Superlead Amplifier and then later on, his Soldano SLO 100. Both had served a purpose for the time being, yet Eddie was prepared to go one step further and teamed up with the American company, known for heavy metal sounds called Peavey.

Both Eddie Van Halen and Hartley Peavey worked together on the 5150 line of amplifiers.

Hartley Peavey’s father had begun his own small music store prior to him discovering rock and roll. However, in 1965 Hartley Peavey decided to focus on rock and roll and after playing in bands, began creating products for rock musicians. With a particular focus for amps modelled and released with appeal for hard rock and heavy metal musicians alike, it came as no surprise that one Eddie Van Halen pursued the idea of the perfect metal amplifiers with the assistance of Peavey.

So by 1991, Eddie Van Halen had approached Peavey and they had agreed to assist with creating the 5150 line of amps. As early as the For Unlawful Carnal Knowledge album, a prototype of the Peavey 5150 was used, notably on “Poundcake”. Eddie began using Peavey’s amplifiers shortly afterwards onstage. By the time 1993 came around, the Peavey 5150 line of amplifiers were commercially released.

The fact that the 5150/6505 amplifiers have been extensively used over the years by a large variety of guitar players proves the ingenious construction and design of them.

It immediately became popular amongst heavy metal players for creating a unique sound for that type of music. This was the beginning of the long relationship between EVH and Peavey that did not end very well in 2004. After this occurred, Peavey retained the rights to continue selling the amp, renamed the 6505 in commemoration of its 40th anniversary as a rock and roll company.

The amp itself is a powerful tube driven amp. Different versions of it come with slight modifications. But if you are hardcore about finding out what Eddie Van Halen wanted to experience with his amp, your best bet is to go for the traditional head and cabinet, the 6505 head and the 430B 412 Cabinet. 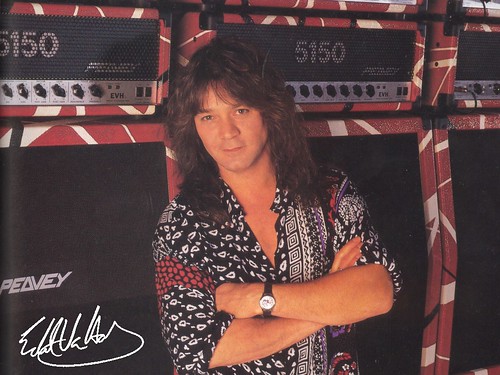 Listed below are the stats for the 6505 head, courtesy of http://www.peavey.com:

Additionally, listed below are the stats for the 430B 412 Cabinet, courtesy of http://www.peavey.com:

Despite the fact that Eddie no longer endorses or uses this particular set of amplifiers, Peavey have managed to continue to sell a legendary and historical amplifier with great success. This is largely due to its tone, being very popular amongst heavy metal and thrash metal players for its distinctive sound.

Hartley Peavey and Eddie Van Halen’s collaboration, although fruitful, did not last over time.