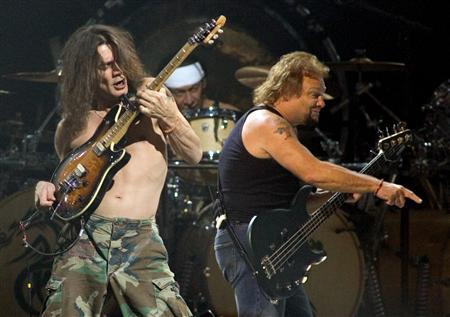 Nobody knew what really began the Van Halen downward spiral. A series of bad events unnerved the once great band that was Van Halen. It started as early as when David Lee Roth left the band in 1985. Sammy Hagar never really got along with the boys terribly well, although early on they shared some good moments together. Gary Cherone left as it really was becoming far worse than anybody could imagine.

Eventually a call by Alex Van Halen after five years of no lead singer was made to Sammy Hagar. There was no real explanation why so, perhaps money was involved. But eventually Sammy Hagar met the boys at a rather notorious meeting at Eddie’s 5150 studios to sign a contract to release another compilation and to go on tour.

A happy reunion for Van Halen? It was a disaster waiting to happen.

Eddie was certainly not in a good frame of mind at this point. Really, for many Van Halen fans, their days had gone. A reunion tour out of the blue did not seem very wise, and turned out to be a disaster.

Although the tour was a financial success, from a musical standing point it was really very bad. The band performed well…except for Eddie Van Halen. Eddie constantly made mistakes and sung off key.

But the worst part was how Eddie looked. He was totally drunk at the time, possibly taking drugs (many people who dislike Eddie personally called him “Meth Eddie” around this time), disheveled with black teeth and truly looked like a Frankenstein like creature. Sadly, for one of the greatest guitarists in living history he had lost it around this time. It was such a transformation that had happened gradually over time: from rock legend to living joke.

Sammy Hagar and Eddie Van Halen are definitely no longer friendly due to the events that occurred on the 2004 Reunion tour.

It is no surprise that Sammy Hagar wrote a detailed autobiography after this tour due to the horrific events that occurred during this time entitled Red: My Uncensored Life In Rock aimed squarely at Eddie Van Halen, with some attacks also at Alex Van Halen.

Regardless of the truth or non-truth from either camp, Van Halen were at a terrible stage in their musical career. But once Sammy Hagar left after the last show in Tucson, he and Eddie were never on good terms again. Eddie smashed his favourite Peavey Wolfgang guitar at the end of the show, threw the pieces into the crowd and told the crowd: “You don’t understand. You people pay my rent. I love you people.”

Eddie Van Halen was really messed up at this point.

Also equally bad was Eddie ending his contract with Peavey in 2004. This was due to breaking contract negotiations with Peavey to sell and market instruments to other corporations, in Eddie’s case, the Charvel Art Series guitars. Also Van Halen had lost their contract with Warner Bros. in 2002 who signed them way back in the late 1970s. Eddie lost his long term wife Valerie Bertinelli in 2001 as well. In general, not a great time for Van Halen.

Still, a compilation with three new songs was released, reminding people of past glories. But Van Halen were still not ready to be a band yet. This part of the Van Halen story will go down in rock history as one of the worst overall. The only way from here was up, however.

The Best Of Both Worlds compilation was the only really good thing to result from the brief reunion.